“Europe Day” Celebrations in the heart of Nicosia   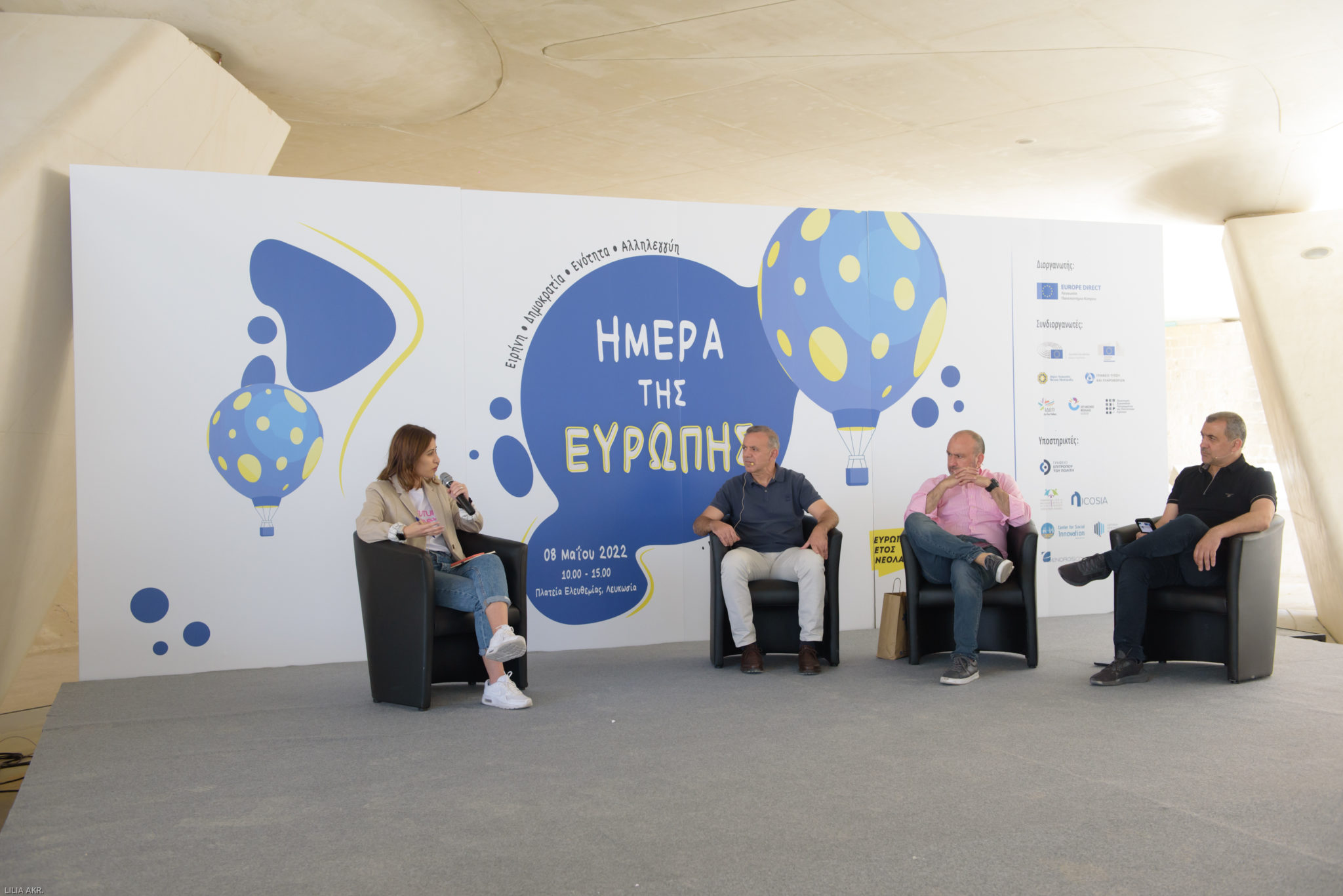 On Sunday, May 8, 2022, Europe-Direct Nicosia – University of Cyprus organised a celebration for Europe Day in Eleftheria Square , which is celebrated every year by all the member states of the European Union, on May 9. A common message from the participants was that Europe must emerge stronger through what is happening in Ukraine, while emphasising the need to uphold universal values such as freedom and democracy.

“The European Union is a common building and a conquest. In this period of geopolitical unrest, we are called to remember how and why the Union was founded “, said the Rector of the University of Cyprus, Professor Tasos Christofides, in his greeting, adding that the European family is called to take the necessary steps to ensure peace and to protect its citizens as a whole. Europe, he added, is many things, “as long as we look around our country carefully how many infrastructure projects have received funding from the European Union.” “It is well known that member states do not have positions of principle, but positions of interest. But those who have positions of principle are the citizens, who consider the principles of freedom, equality, justice, of social justice as fundamental. “The edifice of the Union must be based on these principles”, Mr. Christofides concluded.

The Mayor of Nicosia, Mr. Constantinos Yiorkadjis stated that Cyprus, as a member state of the Union has managed to face and manage many crises for the benefit of its citizens. Today, he said, more than ever, there is a need for Europe to stand united and in solidarity with Ukraine. “At times like these, we owe it to our common history to remember that we are both Europeans and patriots because this is Europe, united in its diversity,” he added.

The Minister of Foreign Affairs, Mr. Ioannis Kasoulides, said that today the people of Europe need a united Europe more than ever, as the continent is facing internal and external challenges and threats. We Cypriots, the Minister of Foreign Affairs added, recognise that our participation in the European Union is extremely important for our security, stability and prosperity.

The Ambassador of France, Ms. Salina Grenet-Catalano, whose country holds the Presidency of the Council of the European Union for the current six months, said that the war that Russia unleashed against Ukraine shows us that Europe still needs to protect fully values ​​and that the Union has demonstrated its strength in the face of this challenge in recent weeks.

The Head of the European Commission Delegation in Cyprus, Ms. Myrto Zambarta, stressed that the focus should now be on the Europe of the future, “a Europe that protects, encourages, reflects the wants and capabilities of our citizens, especially young people. to whom this year is dedicated.

Commissioner for the Citizen, Mr Panagiotis Sentonas said that democracy and peace are not given situations and that the war in Ukraine is a painful reminder, adding that “what keeps Europe united and makes it strong is its democratic vitality, it’s that it is based on democratic principles and that it has at its core the rule of law “.

At the end of the greetings, the European flag was raised to the sounds of the “Papageorgiou String” quartet, which echoed the European anthem “Ode to Joy”.

2022 has been designated as the European Year of Youth and the young people of Cyprus and each member state are invited to submit their proposals for a better Europe. The aim is for the active participation of young people in key consultation processes, while emphasising the restoration of a positive outlook for Europe’s youth. That is why the programme for the celebration of Europe Day in Freedom Square did not fail to include a discussion of young people with MEPs.

Europe Direct Nicosia – University of Cyprus made sure the day was used in various ways by every young man and woman. It managed to combine knowledge and entertainment for the benefit of young and old people, leaving the best impressions. At the bottom part of Eleftherias Square, more than 30 information kiosks were set up that offered information and gifts to the attendees. The big celebration that was set up, provided information on both training and education issues, as well as on co-financed European programmes. Emphasis was also given on each family with young children, with a rich programme that included pottery, painting, storytelling, inflatables, balloons and clowns. Children from the choir of the Municipality of Nicosia gave another note to the event.

The Office of the European Parliament in Cyprus, the Representation of the European Commission in Cyprus, the Municipality of Nicosia, the Press and Information Office, the IDEP Lifelong Learning, the Cyprus Youth Organisation and the Organisation of European Programmes and Cultural Programmws also contributed to the successful organisation. The event was supported by the Office of the Citizen’s Commissioner, the Cyprus Research and Innovation Foundation, the Cyprus Youth Council, the Lefkosia Tourism Development and Promotion Company, the Center for Social Innovation and Enoros Consulting Ltd.