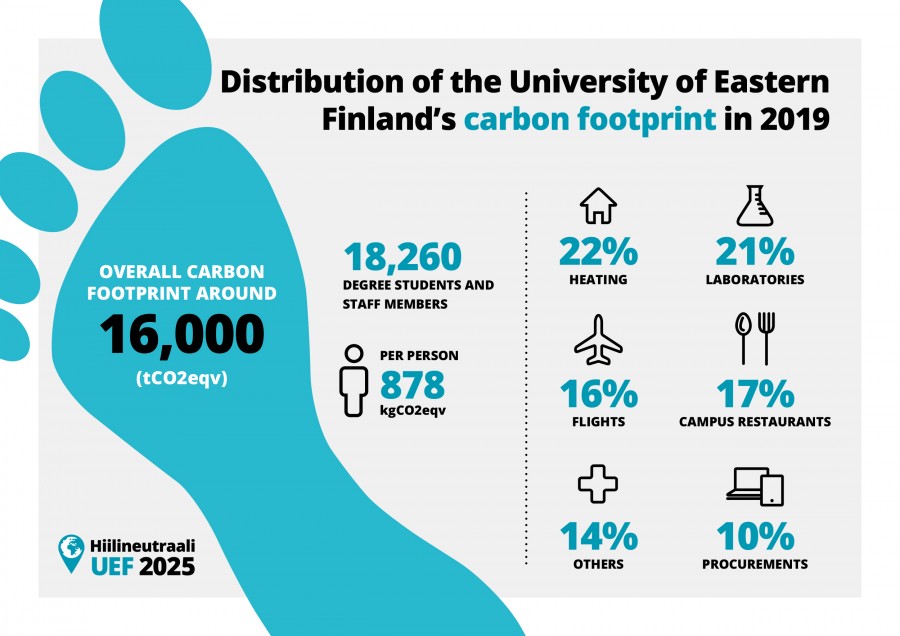 The University of Eastern Finland has calculated its carbon footprint. Last year the university set up several groups of experts to carry out the carbon footprint calculation and come up with ways to achieve the goal of carbon neutrality. The groups comprised experts from the university and representatives from the university’s partners, such as the Student Union, University Properties of Finland Ltd, and campus restaurants. The work was carried out in five groups, each respectively focusing on facilities, procurements, travel, campus restaurants and laboratories.

According to the calculations, the university’s total carbon footprint, which covers both carbon dioxide and greenhouse gas emissions, amounts to around 16,000 tCO2eqv (metric tons of carbon dioxide equivalents). The main sources of emissions in 2019 were heating (22%), campus restaurants (17%) and flights (16%). On an individual level, divided by the total number of degree students and staff, the carbon footprint is 878 kilograms per person.

Becoming carbon neutral by 2025 is one of the objectives of the University of Eastern Finland’s Strategy Action Plan for 2021–2030.

“The University of Eastern Finland has set itself an ambitious but realistic goal. The background work has been very thorough. The measures related to travel are especially sensitive. A significant reduction in the emissions from flights requires flexibility from the alternative means of travel used. The travel agency plays a key role here,” says Associate Professor Arto O. Salonen, who was involved in the working group work.

The calculation of the UEF’s carbon footprint showed the following distribution of emissions: heating 22%, laboratories 21%, flights 16%, campus restaurants 17%, and procurements 10%. The share of emissions from other sources was 14%.

The assessment of the carbon footprint for 2019 serves as a baseline for the goal of becoming carbon neutral. The university has already made many changes to its operations that promote carbon neutrality. In addition, around 4,600 tonnes of carbon emissions generated by university facilities and around 300 tonnes of carbon emissions from flights taken by University Services were offset in 2019. The assessments were used by expert groups to propose measures for promoting the achievement of this goal.

The next step will be to use the observations made during the calculation of overall emissions to prepare concrete measures that the university can take to reduce its carbon footprint. The work and measures are part of the university’s sustainability and responsibility policy.

Report on the 2019 carbon footprint