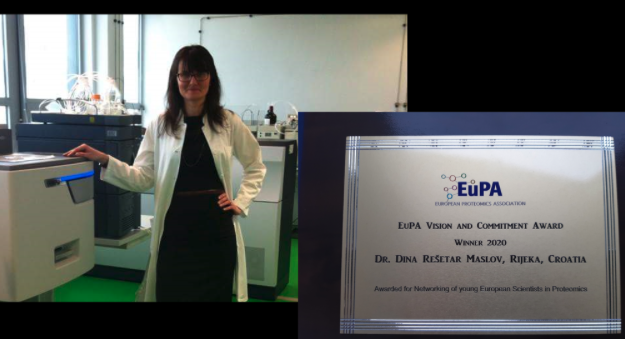 Assistant Dina Rešetar Maslov, Ph.D., from the Department of Biotechnology, University of Rijeka, is the winner of the EuPA Vision and Commitment Award 2020, awarded by the European Proteomics Association (EuPA). The prize was awarded in recognition and gratitude for many years of dedicated work on networking young European scientists in proteomics.

Proteomics is an interdisciplinary branch of science, which includes knowledge of biology, chemistry, and bioinformatics. In proteomics, proteins expressed in various cells, tissues, and/or organisms are analysed by high-precision analytical technologies, such as liquid chromatography and mass spectrometry. The European Proteomics Association (EuPA) gathers excellent researchers in the field of proteomics since 2005, and Dina Rešetar Maslov became a full member in 2016 after joining the Croatian Society for Proteomics. Shortly afterward, the Croatian Society appointed her to the working group in charge of founding the Young Proteomics Investigators Club (YPIC), the purpose of which is to support networking opportunities of young researchers from Europe. Diligence, kindness, and dedicated work of Dina Rešetar Maslov focused on achieving set goals, has been recognized before, she was elected as first vice president (2016-2018) and president of the YPIC (2018-2020), which has been operating under the auspices of the EuPA since 2016.

From the founding of the YPIC until today, through her volunteer work, Dina Rešetar Maslov participated in the creation of logistics system and organization, creation and coordination of the YPIC activities, and led a group of young enthusiasts who contributed to strengthening the visibility of YPIC. She has initiated, organized, and co-organized various freely available educational and social activities (YPIC Educational/Mentoring day, YPIC Meet the expert, YPIC webinars, YPIC Challenge, YPIC surveys, etc.) intended primarily for young researchers in proteomics, but also beyond.

Through her selfless work, Dina Rešetar Maslov contributed to the education and networking of young researchers, but in the long run, she participated in the creation of a new generation of excellent researchers in proteomics, to which she herself belongs.