Sea-Ice in the Arctic at a Historical Low 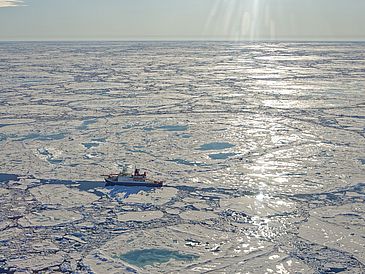 The extent of Arctic sea ice in July is the lowest ever recorded. This was discovered by researchers of the MOSAIC expedition of the Alfred Wegener Institute (AWI). The University of Bremen is also involved in the research project. Embark on the largest polar expedition in history: in September 2019, the German research icebreaker Polarstern has set sail from Tromsø, Norway, to spend a year drifting through the Arctic Ocean – trapped in ice. The goal of the MOSAiC expedition is to take the closest look ever at the Arctic as the epicenter of global warming and to gain fundamental insights that are key to better understand global climate change. Hundreds of researchers from 20 countries are involved in this exceptional endeavour.

The Arctic sea-ice extent is 16 percent below the average value of recent years – the lowest it’s ever been in July since the beginning of satellite observation. The sea-ice retreat is especially pronounced off the Siberian coast, as a result of which the Northeast Passage was ice-free by mid-July. Virtually from the outset, the year 2020 promised to be an anomalous one in terms of both ice thickness and ice drift. In addition, in June there was a cell of warm air that produced extremely high temperatures in Siberia and seriously impacted the sea-ice cover: In the Russian Arctic (the sector from 30 to 180° East), roughly 1 million square kilometres less of the ocean is covered with ice than in the past seven years.

During the MOSAiC expedition, a number of unusual factors were observed and investigated this winter. These included ice-drift and ice-thickness anomalies, which AWI experts surmised would likely have an effect on the summertime melting; model comparisons have since proven them right. And now there are a range of further factors that can contribute to the massive sea-ice retreat, the most rapid loss of ice cover ever recorded in the month of July: This year, temperatures on the East Siberian coast were more than 6 °C warmer than the long-term average in May and June.

A cell of warm air over the region dominated the weather in the Arctic, leading to temperatures far above the long-term average. As a result, the snow melted early in the year, and Siberia’s permafrost soils began thawing. In June, this warming also led to intensified sea-ice retreat in the Laptev Sea, a phenomenon that spread to the East Siberian Sea in early July. By mid-July, this had progressed to such an extent that the Northeast Passage was completely open for the first time in 2020. Since the beginning of July, conditions have changed: there is a high-pressure cell over the East Siberian and Chukchi Seas, accompanied by unusually warm temperatures (up to 10 degrees Celsius above average) over the Central Arctic. The stable atmospheric pressure system over the Arctic helped to strengthen the warm-air cell, which led to intensified melting of the snow cover on the ice, and with it, to an earlier breakup and melting of seasonal ice. Researchers consider areas in which less than 15 percent of the ocean is covered with ice as “ice-free”.