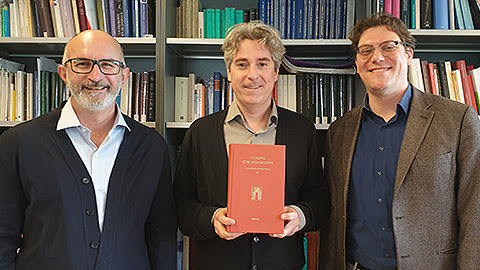 The edition of the Extractiones de Talmud [per ordinem sequentialem] is the result of a European project coordinated by ICREA researcher Alexander Fidora and aims to rescue from oblivion the Latin translations of this sacred Jewish text, older than most Hebrew manuscripts surviving the censorship of the 13th century.

Researchers from the Department of Antiquity and Middle Ages Studies at the UAB have published the first edition of the Extractiones de Talmud, the Latin translation of what formed the basis for the development of Rabbinic Judaism and which in the 13th century served to review the condemnation of the Talmud as a blasphemous text. The book has been published by the prestigious Corpus Christianorum Continuatio Mediaevalis series of the Belgian Brepols Publishers.

Professors Ulisse Cecini and Òscar de la Cruz were in charge of the critical edition under the framework of the European Research Council’s (ERC) project “The Latin Talmud”, directed by ICREA researcher Alexander Fidora. For its publication, they studied the eight conserved manuscripts – four of which date back directly to the 13th century – located in the libraries of Berlin, Carpentras, Florence, Girona, Paris (2), Schaffhausen and Wrocraw. The result is a monumental feat consisting in over 200 pages: the Latin text covering 500 pages, an introduction in English and several appendices in Hebrew.

“The Latin translation of the Talmud represents a monumental collection of Rabbinic wisdom spanning over more than five centuries of a text which even today is fundamental for Judaism”, explains Alexander Fidora. “Bringing it back from oblivion gives access to a Talmudic text which is older than most of the few Hebrew texts which survived the censorship, and at the same time it does justice to the difficult history suffered by Jews in Europe.”

Key to the Study of the Talmud Censorship Process

This pioneering translation into Latin of Talmudic passages formed part of the Disputation of Paris against the sacred Jewish text, which began in 1239 when convert Nicholas Donin denounced the Talmud as blasphemous to Pope Gregory IX. After that the events quickly unfolded: the following year King Louis IX of France confiscated all copies of the Talmud and gave the order to begin a process against the text which ended with it being condemned as a blasphemous text. Consequently, the Talmud and other Hebrew texts were publicly burned in the Place de la Grève of Paris.

The Jews of Paris demanded the return of their copies of the Talmud, since without them they could not practice their religion. The result of these revendications are the Extractiones de Talmud (1245), a Latin selection of 1,922 passages from the Babylonian Talmud, which served as the basis for reviewing the condemnation by the French ecclesiasticals. The Hebrew text finally went from being forbidden to being censured.

Although the process against the Talmud has been an object of study for many scholars, Jewish and Christian alike, for the past almost 300 years, its Latin translation had never before been published.

“The Latin Talmud and Its Influence on Christian-Jewish Polemic” is funded by the European Research Council under the European Union’s Seventh Framework Programme (FP7/2007-2013) / ERC Grant agreement n° 613694.

Read more about LATTAL in the Journal of Transcultural Medieval Studies and please also visit our project on “Latin-into-Hebrew”.