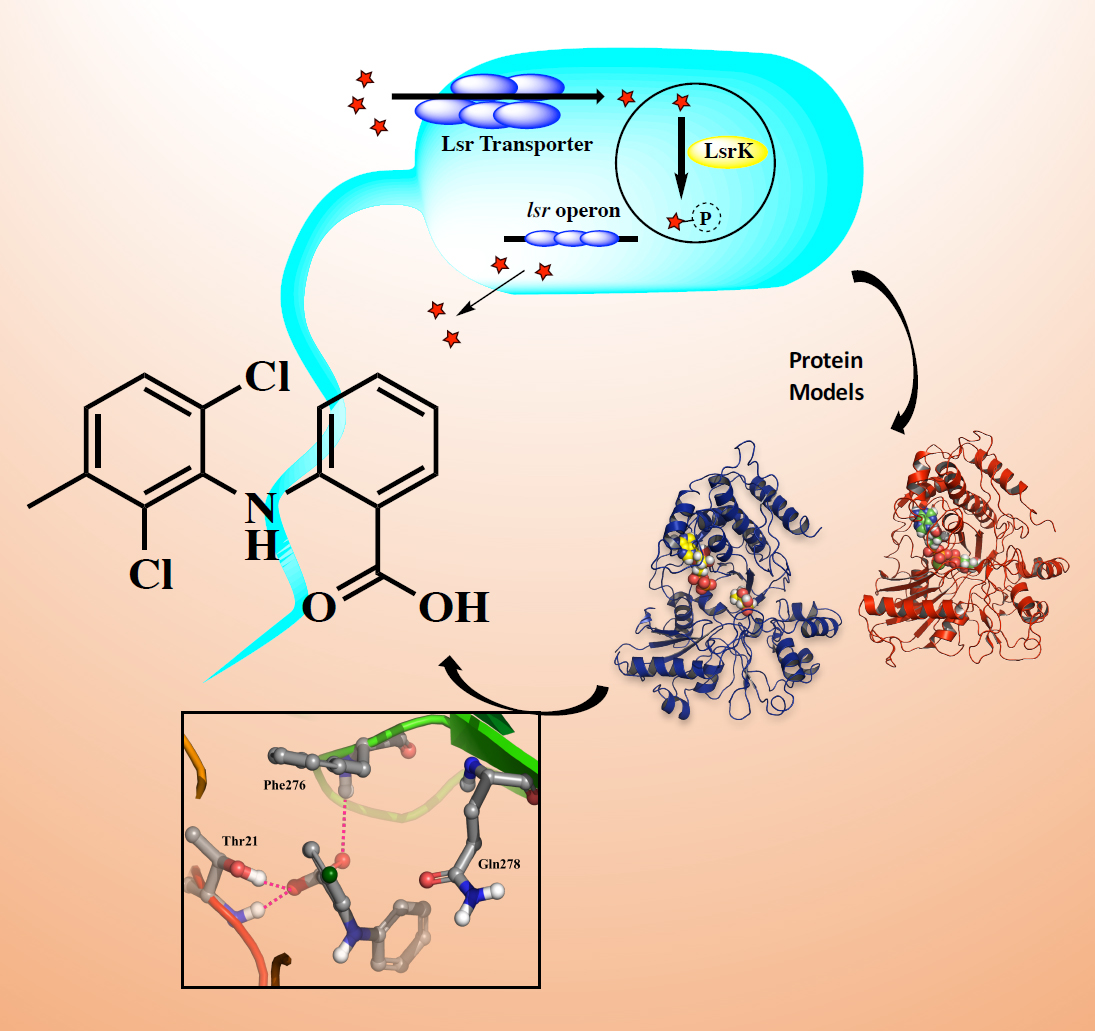 In the era of increased antibiotic resistance, it is necessary to focus on developing new antibacterial agents. Rising resistance alarms us following the traditional mechanisms of antibiotics for drug development. Addressing this, the INTEGRATE consortium focused on validating novel targets that can be used in future antibacterial drug development. Quorum sensing (QS) is a process of bacterial communication involved in the host colonization, virulence factors production, biofilm formation and infection establishment. Consequently, the investigation of quorum quenching and inhibiting agents, which would interfere with the production and processing of QS mediators, has become a new strategy for developing antivirulence agents.

QS is mediated by signalling molecules called autoinducers (AI) in a population density dependent manner. The AI-2 signalling molecule is, derived from precursor 4,5-dihydroxy-2,3-pentanedione (DPD), involved in both intraspecies as well as in interspecies communication. LsrK is a kinase involved in the phosphorylation of AI-2 molecules, which (i.e.the phosphorylated form of AI-2) further regulates the QS pathway. Thus, inhibiting LsrK can lead to quorum sensing inactivation and interfere with the pathogenesis.

There are no reported inhibitors or protein structure of LsrK (until 2018). Thus, University of Eastern Finland researchers initiated the drug design efforts by modelling the LsrK protein structure using computational methods. The modelled protein structure was used for the screening of the compound library available at the Institute for Molecular Medicine Finland. The prioritized hits were tested in experimental assays for LsrK inhibition at the University of Helsinki. This study resulted in two primary hits, which were further confirmed by an analogue based approach. This analogue approach resulted in four more hits of micromolar activity against LsrK.

The identified LsrK inhibitors through this study are the first class of LsrK inhibitors reported to date. These hits will be further optimized to achieve high affinity and function as useful tools for improving our understanding towards inhibition of LsrK in the AI-2 pathway and its significance as a potential antivirulence strategy. Considering the limited knowledge about LsrK structure, the study offers a great overview of the behaviour of the protein and a perfect starting point to better understand the protein-substrate dynamics and how to interfere with it.

Image caption: The new LsrK inhibitor developed by the researchers (the structural image on the left) binds to the active area of the target protein (atom image at the bottom). By inhibiting the function of LsrK, it is possible to block signalling within a bacterial cell and, consequently, signalling between bacteria (image at the top).