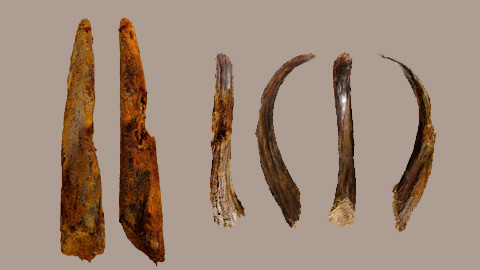 A research conducted in collaboration with the UAB at the Aranbaltza site in the Basque Country reveals the existence of 90,000-year-old tools built by Neanderthals, the oldest samples of Neanderthal-built tools ever found in the Iberian Peninsula. The study was recently published in the journal PLOS ONE.

The fieldwork conducted at the Aranbaltza site in Barrika, Biscay, was led by Joseba Rios-Garaizar, archaeologist from the Spanish National Research Centre on Human Evolution (CENIEH) has revealed several episodes of neandertal occupations with preserved wooden remains. Members of the UAB Archaeology team Raquel Piqué and Oriol López Bultó also collaborated in the study of these remains.

In 2015, the excavation revealed the presence of waterlogged sediments preserving wooden remains in an extraordinary state of preservation. The assemblage includes including two wooden tools, and one of them is a 15 cm long digging stick. The detailed analysis of this tool and the OSL dating of the sediment that bears the wooden remains indicate that the objects were deposited around 90,000 years ago and thus, they were made by Neanderthals.

The research team was able to discover through micro-CT analysis and a close examination of the surface that a yew trunk was cut longitudinally into two halves. One of these halves was scraped with a stone-tool, and treated with fire to harden it and to facilitate the scraping to obtain a pointed morphology. Use-wear analysis revealed that it was used for digging in search of food, flint, or simply to make holes in the ground.

The archaeological project at Aranbaltza started in 2013 to investigate the last Neanderthals from Western Europe, who were responsible for the Chatelperronian culture. The ongoing excavations have revealed different Neanderthal occupation events spanning from 100,000 to 44,000 years ago. This makes of Aranbaltza an exceptional site to investigate Neanderthal evolution and behavioral variability.

This archaeological project is coordinated by the CENIEH and INRAP and funded by Heritage Center of the Bizkaia Regional Government (2013-2017) and Basque Government (2014-2015). Researchers from the following institutions have participated in this publication: CENIEH, Universitat Autònoma de Barcelona, Universidad de Burgos, INRAP, Universidad del País Vasco and Universidad de Cantabria.