Maastricht researchers are bridging the gap between art, data and computer science 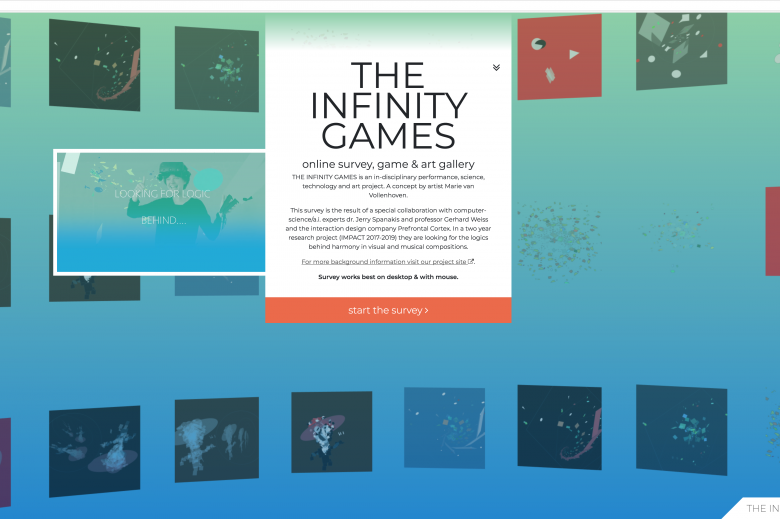 Computer game researches compositions and harmony in the arts

Why do we consider some art to be more beautiful than others? Can computers predict our preferences and use this information to create art? What are the logics behind our sense for harmony? These are the key questions in a new research study by the Department of Data Science and Knowledge Engineering (DKE) at Maastricht University. Artist and director of In Infinity Productions Marie van Vollenhoven came up with the idea behind the project. The Infinity Games is based on an interactive questionnaire, which is now available at http://infinitygames.xyz.

Interactive questionnaire
The questionnaire, launched today, is not a traditional survey but a type of computer game. The researchers developed the tool in collaboration with game/interaction designers at Prefrontal Cortex and web designer Thimo Pagen. Participants are asked to change the compositions through short, interactive assignments. The resulting data is used to examine the universal rules of visual composition. In the final part of the questionnaire, participants can create their own composition. Vollenhoven’s idea is to develop the tool further to introduce children to the possibilities of artificial intelligence and composition in a playful way.

The Infinity Games
With The Infinity Games, Maastricht University researcher and professor Gerhard Weiss, assistant professor Jerry Spanakis and artist Marie van Vollenhoven are bridging the gap between art, artificial intelligence and data technology. They have teamed up to research how people respond to compositions and harmonies in the arts. In 2017, initial data were collected by combining sound recordings of pianist Jesse Passenier with series of visual compositions. Through interactive, interdisciplinary performances that use movement, spoken-word and music (iQuartet), more artistic research was done during the Cross Currents Festival of Jazz Maastricht. The Infinity Games was also nominated for the Klokhuis Science Award. The launch of the questionnaire is ushering in a new phase in the project.

IMPACT project
The Infinity Games is part of IMPACT (International Meeting in Performing Arts and Creative Technologies), a three-year project from the international subsidy programme INTERREG. IMPACT aims to stimulate collaboration between the artistic, academic and manufacturing industries. In addition to Maastricht University, project participants include other academic and cultural institutes, such as Jazz Maastricht, ViaZuid, Hasselt University of Applied Sciences and Hasselt University.