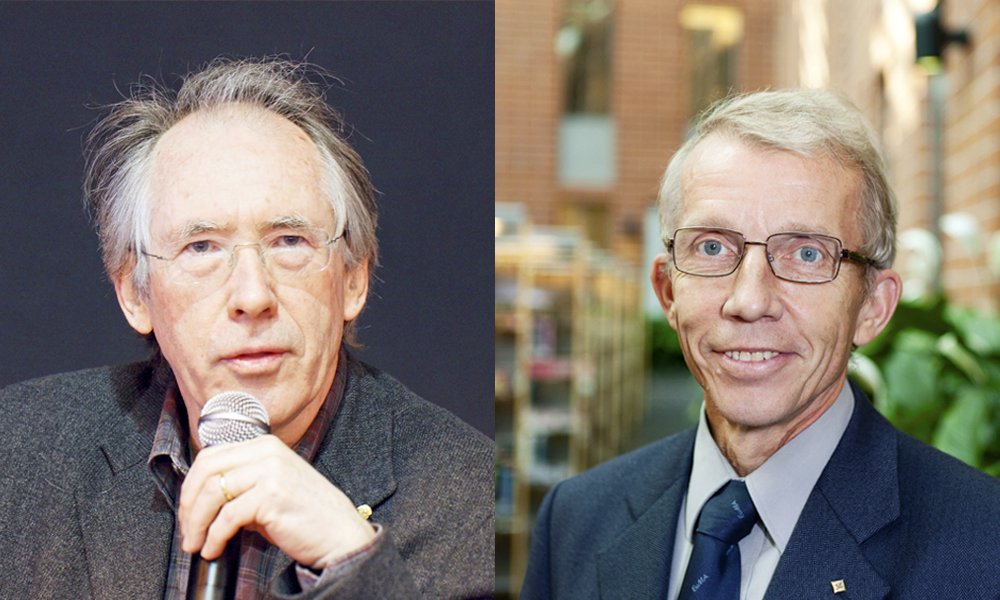 The British novelist, screenwriter, and playwright, Ian McEwan, and the expert in high frequency technologies,   Antti Räisänen, professor at Aalto University in Finland, will be awarded Doctores Honoris Causa by Universidad Carlos de Madrid (UC3M) on January 30, within the framework of Dia de la Universidad (University Day) for academic year 2017/18.

During the ceremony, in which Extraordinary Doctoral Awards will be bestowed and the new doctorates and the new UC3M doctorates will be conferred, the two Doctores Honoris Causa will give the keynote speech. The encomium for Ian McEwan will be given by Professor Pilar Carrera, from the UC3M department of Journalism and Audiovisual Communications, while the encomium for Antti Räisänen will be undertaken by Professor Magdalena Salazar, from the Department of UC3M Signal Theory and Communications.

Ian McEwan (1948) is one of the most respected and original authors of current English narrative. During his childhood, he lived in different countries where his father, an officer in the army, was posted. He received a degree in English literature, studying at Sussex and East Anglia universities, where he began his career as a writer and      wrote his first two short story collections: “First Love, Last Rites” (1975; the Somerset Maugham Award) and “In between the Sheets” (1978). Since then, he has published fourteen novels, such as “The Child in Time” (1987; the Whitbread Prize and  the Prix Fémina), “The Innocent” (1990), “Enduring Love” (1997), “Amsterdam” (1998;  the Booker Prize), “Atonement” (2001, which obtained, among other prizes, the, WH Smith Literary Award, the People’s Booker Prize and the Eurasian Commonwealth Prize), “Saturday” (2005; the James Tait Black Memorial Prize), “Solar” (2010; the Wodehouse Prize), “The Children Act” (2015) and  his latest book,  “Nutshell” (2016), among others. Many of his novels have been made into movies, such as: “The Comfort of Strangers”, by Paul Schrader (1990), “The Innocent”, by John Schlesinger (1993), “Enduring Love”, by Roger Michell (2004), “Atonement”, by Joe Wright (2007) and “The Children Act” (2017), by Richard Eyre. In addition to those mentioned, he has received other awards such as the Jerusalem Prize and the Shakespeare Prize.  . McEwan is an Officer of the Most Excellent Order of the British Empire, a member of the American Academy of the Arts and Sciences, the Royal Society of Literature, and the American Association for the Advancement of Science.

Antti V. Raïsänen (1950) is a renowned international expert in high frequency technologies.  He has been head of the Radio Science and Engineering Department at the University of Aalto (Finland) -formerly Helsinki University of Technology – and principal researcher at  SMARAD (Centre of Excellence in Smart Radios and Wireless Research) of the Finnish Academy. He has written more than 700 scientific and technological articles published in high impact journals and international congresses as well as 38 books; he has produced seven patents and has directed more than 50 doctoral theses. He has been the principal researcher in numerous research projects and contracts funded by the European Union, the European Space Agency and other international and Finnish entities. His teaching and research is focused on antenna design and experimental characterization of microwave frequency bands, millimeter waves and terahertz waves as well as radio engineering, among other subjects.  He has been a visiting professor in institutions such as Chalmers University of Technology (Sweden), the Jet Propulsion Laboratory of the California Institute of Technology and NASA (USA), the University of California at Berkley (USA) and Paris VI (France), among others.  At UC3M, he held a Chair of Excellence in academic year 2013-14. Raïsänen has received numerous awards and honors from organizations such as the AMTA (Antenna Measurement Techniques Association), the IEEE (Institute of Electrical and Electronics Engineers) and the EuMA (European Microwave Association).