The effects of international mobility and foreign nationality on career progression in Universities.  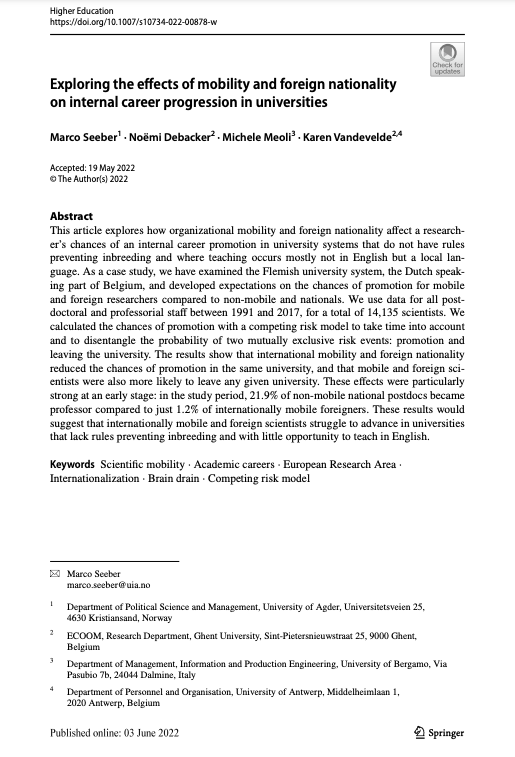 In August 2022, Karen Vandevelde from University of Antwerp, member of Yerun organisation, Marco Seeber, University of Agder (Norway), Noëmi Debacker, Ghent University, and Michele Meoli, University of Bergamo, published an article on the effects of mobility and foreign nationality on career progressions in Universities.

The article titled “Exploring the effects of mobility and foreign nationality on internal career progression in universities” examines the challenges faced by academics, particularly PhDs and postdoctoral researchers, in the advancement of their careers when they have experienced international mobility or are foreign nationals at the universities where they work.

According to the study, which analysed postdoctoral and professional data between 1991 and 2017, international mobility and foreign nationality significantly reduced the chances of promotion within the same university, and foreign and mobile scientists were more likely to leave any given institution as well.

Three factors have a great impact on the careers of mobile and foreign academics. The first one is the language, indeed in most cases professors must teach in the country’s official language and this reduces the chances for non-native speakers to progress to positions combining research and teaching. The second is a lack of transparency about the definition of “research excellence” that brings researchers to conform their work to expectations about research standards and outcomes influenced by national evaluation processes and institutional traditions. Since mobile staff are often less familiar with excellence criteria in a particular local context, they do not always succeed in demonstrating their own level of excellence accordingly. The third one can be described as “homophily”, a phenomenon in which people are more likely to work with others perceived as similar. People on a hiring or promotion committee can be implicitly biased in favour of candidates they are already familiar with and that they would prefer to collaborate with.

The article also points out a number of recommendations for mobile researchers as well as for institutions. In order to avoid the potential negative effects of international research mobility, researchers could preserve a link to their home country, become more familiar with the “implicit” rules or norms in hiring and career progression, become proficient in the local language and move only to tenured positions. Universities who embrace internationalism could make sure the hiring and promoting process is based on merit, provide free language courses for international PhDs and postdocs, communicate performance criteria more transparently and introduce rules that limit hiring of own graduates.

If you want to know more, you can read the full article here.